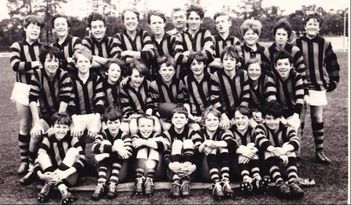 Frankston Rovers celebrated their 50th year in 2016.
Such a fabulous achievement for a small stand alone Junior Football Club.
It has seen many talented footballers through its doors and many, many hours of volunteered time from parents and grandparents also.
We continue to thrive each and every year and now with girls football taking off, we are adding teams for almost every age group in Girls Football.

Dermott Brereton, third from left, bottom row, was a member of the Frankston Rovers U10s team in 1972.

DIANA Francis washed so many muddy footy jumpers that she went through several washing machines.

Winter weekends at the Francis’ Frankston house in the 1970s resembled a dry cleaning shop; woollen brown and gold jumpers sprawled around the lounge room, drying out in front of an old oil heater.

It was part of the behind-the-scenes toil that went on as the Frankston Rovers Junior Football Club took its early steps.

The club was new on the scene - it had kicked off in 1966 - and those early years were crucial as it established itself.

Frankston Rovers turned 50 this year and is celebrating with an anniversary function at Frankston Football Club on Saturday, July 30. Thousands of youngsters have kicked off their playing careers at the Rovers.
​
Most have fond memories of their junior days at Bruce Park, and some even kicked on to the highest level; the Frankston Rovers producing - so far - 13 league players.

Nathan and Ryan Lonie played in six premiership at the Frankston Rovers between 1990-99.Nathan Lonie was one of them, forming his footy passion at the Rovers and pushing on to play in the AFL with Hawthorn and Port Adelaide.

Nathan, with twin brother Ryan (who also played league footy, with Collingwood), played in six premiership at the Frankston Rovers between 1990-99.

Nathan says they were the happiest days of his football journey.

“The parent involvement made it such a special club to be around,’’ Nathan said.

“Our parents gave us everything. And I think that’s still the way it’s done there today. It certainly was ingrained in me for when my kids start playing sport.’’

Nathan and Ryan’s dad Ken was team manager and their mum Annette worked in the canteen. Nathan fondly recalls those formative years being coached by John Vandervalk. It was great fun. Now, Ryan’s son Oscar plays for the Rovers’ U9s.

“Ryan and I are very grateful and thankful for what the Frankston Rovers did for us and we are always happy to go back and help them out,’’ Nathan said. “The club means a lot to us.’’

Bob Francis took his son Wayne to Rovers training in 1971 and was immediately roped into coaching.

“I was only going to do it for the one week but I ended up doing it for 13 years,’’ he said. “I enjoyed it. They taught me, I didn’t teach them. My policy was a bit different to most coaches. I believed every boy should play, regardless of the circumstances. It possibly cost us a few premierships…but everyone got an opportunity.’’

Bob still recalls the day a ginger-haired kid with an uncanny ability to take a mark joined in training.

Dermott Brereton was dubbed, “Magic Hands’’, by his Frankston Rovers U10s coach Bob Francis.His name was Dermott Brereton. “I used to call him, ‘magic hands’,’’ Bob said. “Even as a kid, an 11-year-old, he’d train with the under 14s and out-mark them.’’

All up, the Frankston Rovers have won 30 premierships, while 12 players have represented Victoria and 250 players have played 100 games or more.